The latest product to be unveiled by tech giant Google was not a new smartphone or wearable device or search feature designed to be used by millions of everyday consumers.

Rather, it was a US$6000 whiteboard designed to be used in your office conference room.

The release of Jamboard puts the Silicon Valley behemoth into the niche but increasingly competitive market of interactive whiteboards, the high-tech equivalent of those dry-erase boards that employees use to scrawl out diagrams, lead presentations or brainstorm new ideas.

Microsoft and Google have both got into the interactive whiteboard market this year, creating new competition for the largest and most entrenched player, Smart Technologies, a Canadian firm recently acquired by Foxconn.

“The last piece of equipment in the office and classroom that hasn’t made it into the modern age is the whiteboard,” said Smart Technologies chief technology officer Warren Barkley.

“We, along with Microsoft and Google, see this as an opportunity to move that static, physically isolated content into the wider world.”

Though commonplace today, the standard whiteboard is an innovation itself. Popularised in the late 1980s and 1990s, the whiteboard has, in many instances, replaced the dusty blackboard that always left hands, clothes and floors coated in a thin layer of chalk residue. 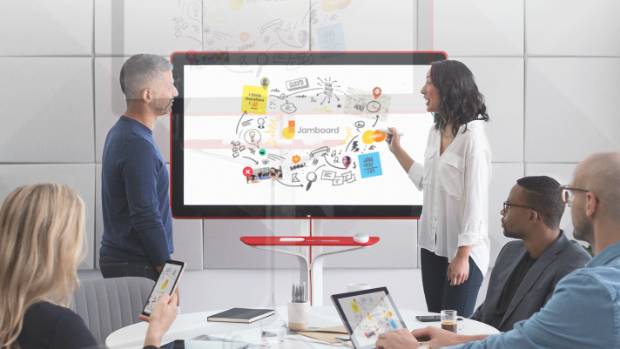 As with a whiteboard, employees can post their ideas, documents and images on the Jamboard, only they won’t need markers, tape or sticky notes to do it.

The digital whiteboard is a more modern invention and it continues to evolve.

Barkley said those devices were primarily large display devices that used projectors and had maybe one or two touch points. Today, interactive whiteboards come with high-tech LED touch screens whose ease of use more closely resembles a tablet computer.

That evolution has come with fits and starts, he said, and new arrivals could advance it further.

Google’s Jamboard is a 55-inch, touch screen monitor that connects to the cloud and taps into Google’s G Suite of productivity apps, including Google Drive, Docs and Calendar. Equipped with machine learning technology, the board is marketed as a tool for companies to make information gathering and brainstorming more seamless.

It’s unclear whether Jamboard will have a meaningful impact on Google’s income.

It strikes a different tone from the company’s other products, which are generally lower cost and marketed to the masses, because the electronic whiteboard is distinctly aimed at a business crowd with a hefty IT budget.

“At the very highest level, I would say almost every company today is going through some form of digital transformation,” said Julia Atalla, senior director of Microsoft’s Windows and Devices group. “Medium- to large-size businesses, they’re looking at ways they can innovate faster.”

Collaboration has become harder in office environments where some employees work remotely or travel often, and information is increasingly stored in digital formats and shared through email.

Having a digital interface that all workers in a meeting can connect with to share information, video conference and otherwise engage makes those gatherings more productive, they say.

But IT trends could also make the large capital investment needed to purchase the boards harder to justify, Thompson of IDC said.

“These behavioral themes mean that workers are just as likely to use personal tools to share and collaborate as they are a space in the office.”